At the foot of the Mount Ventoux, a few kilometers away from the east of Carpentras, very close to the beautiful Luberon, Mormoiron is a village with a very strong identity. Here, we are proud to be both Provencal and rural. With such wealth in our lands, we are bound to be proud ! 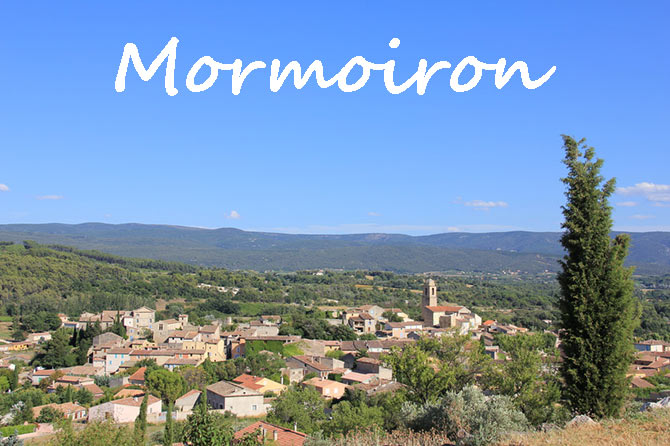 The underground of Mormoiron is a real patchwork : there is high quality sands, currently under exploitation, but also ochres and gypsum, that had been exploited up until the last quarter of the 20th century, and even a very particular type of clay called « mormoironnite » that works really well as a gastric bandage. Of course, there is also a good amount of cultivable lands since agriculture is the main activity of the village. Vines, cherries ands olives are the three pillars of farming in Mormoiron.

The history of the village is full of aspects. A legend, considered wrong by the historians, but still repeated by the inhabitants of Mormoiron says that its name comes from the french word « murmure » (whispers). And precisely, the bees’ whisper. According to this legend, the people of the village, sieged by odd invader, got rid of him… by throwing at him several hives from the heights of the city walls.

A fiction that expresses the nature of the village. We may know how to receive friends, but also how to protect and preserve ourselves. Because we care about our identity.

Either born into it or not, the people of Mormoiron like their village. And we can understand that, simply by wandering in it…

The village of Mormoiron

This site uses cookies. We presume you agree but you can reject if if you want.Accept Reject Read More
Legals and Cookies

This website uses cookies to improve your experience while you navigate through the website. Out of these, the cookies that are categorized as necessary are stored on your browser as they are essential for the working of basic functionalities of the website. We also use third-party cookies that help us analyze and understand how you use this website. These cookies will be stored in your browser only with your consent. You also have the option to opt-out of these cookies. But opting out of some of these cookies may affect your browsing experience.
Necessary Always Enabled
Necessary cookies are absolutely essential for the website to function properly. This category only includes cookies that ensures basic functionalities and security features of the website. These cookies do not store any personal information.
Non-necessary
Any cookies that may not be particularly necessary for the website to function and is used specifically to collect user personal data via analytics, ads, other embedded contents are termed as non-necessary cookies. It is mandatory to procure user consent prior to running these cookies on your website.
SAVE & ACCEPT